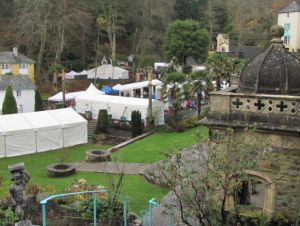 This last weekend saw the second Portmeirion Food and Craft Fair, so I grabbed my bag and went along. Portmeirion should, after all, be a great venue, packed with character and style. I didn’t go last year but I had heard some rather equivocal reports, so I was eager to see what was what for myself. And to see if there were any exciting new producers, people I didn’t already know who were doing something interesting.

First, the good news: it was busy. The car park was heaving, even though we got there relatively early, but the Fair itself was perfectly manageable. Second, the bad news: that changed.

It quickly became so busy that you couldn’t move in some places – where stalls had been laid out along a narrow path, for instance – and the stalls themselves were so cramped as to be inaccessible once three or so people were there. Good to see it so popular, but I wonder how many people gave up? I wanted to visit the Pant Du stand, for instance – they have a vineyard at Dyffryn Nantlle and also produce delicious cider – but couldn’t even get into the little marquee where, according to the plan and a hanging sign, they could be found. I could – temporarily, I’m sure – get near two brewers, but I wanted Pant Du cider (grumble). Time to move on. 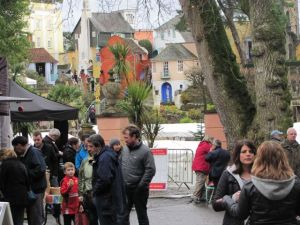 There were a couple of stalls selling seafood and there was plenty of good meat on offer, too. Some of the nicest sausages I tasted, and there were plenty, came from Oinc Oinc. I usually get them from their stall at the Porthmadog Food Market though, but I haven’t had the chance to try their ham there. Beam me up, Scottie – delicious. It was a pity I’d had a good breakfast, really (I should have known better), because they were doing hot ham rolls which looked and smelled wonderful.

But there seemed to be a lot of butchers, and almost no one selling vegetables – the closest was probably our wonderful mushroom grower. Interestingly, the stallholder at Cig Howatson, one of the butchers – with fabulous and really hot chorizo – said he’d never realised just how many people were vegetarian until he started doing food fairs. 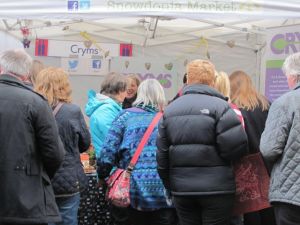 By this time the Fair was getting seriously crowded, but one stall I did manage to get near was that of Cryms, cake and – ooooo, especially – biscuit producers. They don’t have a web presence yet which is a shame, because their lemon meringue biscuits were to die for and much, much better than you’d think possible (but they will have a website up soon). By the time I decided I really  couldn’t live without them, I couldn’t get near the stand. Rats.

But I did manage to fight my way back to an ethical artisan coffee roaster – and there was my new and exciting supplier. I’d no idea we had anybody doing something like this around here, and I’m really pleased to have discovered Poblado Coffi. The smells from that stall – which happily was inside, unlike most – were delicious, though unfortunately there was no facility for tasting (!). Hmm, this Fair definitely needs more thought if it’s going to be up there with the big boys, and there’s no reason why it shouldn’t be.

Quibble, quibble, quibble – I know, that’s me. But somehow I expected better of Portmeirion. I know they can’t police the people manning the stalls, so there’s nothing they could do about the one whose concept of customer service was heavy and universal sarcasm, but they can do some editing of stallholders and stall placements. As I said, there were, or seemed to be, a lot of butchers – the local meat is fab so that’s not surprising – and people selling preserves (some were shops rather than producers, which did add an element of variety) And there was a curious lack of a good chocolatier.

One other quibble concerned the crafts. Not their existence – I’m a craftsperson myself – but the lack of ‘editing’ when it came to stall placements (and again the fact that some were not actual craftspeople, but were retailing bought-in items). Yes, there were things like three jewellers all making ‘celtic’ silver jewellery and almost next door to each other, but more serious was the placing of some next to people frying bacon or sausages. Fabric and fibre take up smells really quickly, and the beautiful bags on one stall were beginning to whiff like a transport caff. And that was at the start of the two days; by the end they’d have been unsaleable – you expect better when you’re paying a decent rate for a stall. I wouldn’t like to see the crafts relegated to some sort of quarantine, but maybe it would be best to concentrate on one or the other. And to institute some sort of quality control.

So was it worth it, and would I go again? Well, I discovered the coffee roaster, the amazing lemon meringue biscuits and the spicy, hot chorizo. I didn’t know about them. But most of the other stalls – and many were good; this isn’t to detract from that – were familiar (and the one I’d have liked to see wasn’t there, but she’ll be at the market in Dolgellau this weekend). If I go next year, I’ll make sure I’m there as the Fair opens, I won’t have breakfast and I will be out of there by, oh, 11.a.m. If I go. As most of it’s outside, that will depend on the weather as well.