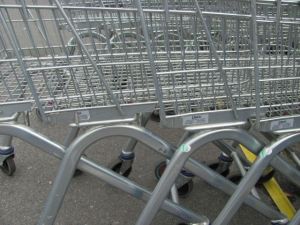 Once upon a time, I didn’t think twice. I popped into my car, popped down to Sainsburies, popped things into my basket, popped the money out of my purse and popped back home. There was a notable absence of local food shops in my (temporary) part of South London – there had been a traditional butcher, but he’d closed down – and no local market. I went up to Borough Market some weekends and could always pop to Brixton or Tooting if I needed anything more exotique. In all fairness, the picture when I visited my family in the country wasn’t dissimilar, except there was no Sainsbury. (It was dangerously northern and there was a time when whippets in cloth caps ate Sainsbury’s managers, or so you’d have thought; leek-chomping, daffodil-wearing dragons evidently still present a problem.)

In the past twelve years things have changed, and not only because I now live – nominally – ‘twelve miles from a lemon’, or – really – fifty-five from fresh yeast. More and more people have begun to question the role of supermarkets, and not just the predictable knit-your-own-yoghurt bunch who started avoiding them in the late 1960s. Questions have been raised about their ethics, about the way they treat suppliers, about the impact the arrival of a supermarket can have on a high street or small community, about the insidious, big-brother-like monitoring of their customers. (Got a loyalty card? You are being watched… and in my case they are watching someone called Mrs Xanthe Throngdribble, who is apparently 96 but who still works as a brain surgeon and lives with her seventeen children. I like filling in forms, sometimes. Then there’s also their monitoring of the aforementioned Mrs Throngdribble attempting to take a photograph of trollies in a supermarket car park. She’s got a surprising turn of speed for someone in her nineties.)

I have friends who won’t go near any supermarket, or who avoid a particular chain. And that does put more restrictions on you when you live somewhere remote than I’m prepared to accept, whatever I may feel about their vaguely sinister power. Most of the time I can manage perfectly well with the few local shops and a branch of the Co-op, and that’s what is available without a twenty-mile round trip. When Tesco opened a smallish branch in the town ten miles away a friend and I took about two hours to wheel our way through the excited crowds (in the words of Roz from Frasier, ‘there’s a town that badly needs a bowling alley’), being just as excited ourselves and greeting each new discovery with loud cries: ‘They’ve got lemon grass! Lemon grass!!!’

Now I could use the fact that much of my work involves ingredients I can only get in supermarkets as justification, but it would be a Potemkin village of an excuse. I do not want to have my choice of food restricted just because I live somewhere magnificent but comparatively remote, but I do want to do the best I can by shopping locally as much as possible. It’s a balancing act, and I don’t want to be doctrinaire. But there is one exception. Asda I will avoid if I can, partly because I can get what I want elsewhere, partly because it requires a longer journey and the use of more expensive petrol, partly because I hate the dark, cramped branch concerned and partly because they are a Walmart company and I really, really, really hate Walmart’s labour – sorry, labor – practices.

All of this means that I can build up quite a shopping list for those occasions when I have to go to a larger town, one with at least one large supermarket and maybe two or three, and one which is wonderfully a breath away from a small branch of Waitrose. The larger town also contains the big hospital, and it’s quite normal to get a call along the lines of ‘I’ve got to go and visit Huw tomorrow, do you want anything from Waitrose?’. It reaches the stage when you resent a hospital appointment that doesn’t mesh with their opening hours. 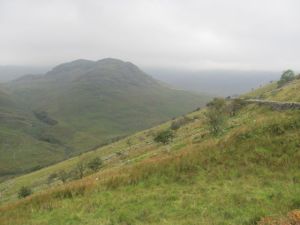 There’s no more ‘popping’, of course. That’s partly because of the drive there – not one to be undertaken on a whim. There are essentially two choices, and they both take roughly the same time, about 90 minutes: the main road (roadworks, traffic jams at school time, motorbikes, caravans), and the mountains (roadworks, lycra-clad men on bikes, motorbikes, caravans). The main road is quite good, though with bottlenecks, but the mountain road is amazing – it’s behind the line of wall on the right and Snowdon is on the left out of shot. On a good day it doesn’t half beat the traffic jam at the bottom of Streatham Common; on a bad day it’s like doing your shopping by way of Mordor, complete with orcs in cycling gear looming out of the mist.

Last week I did some quick calculations. How much could I save by going to Bangor for X, Y and Z, allowing for the fact that I would have to spend A on fuel and take B hours to get there, at a potential hourly rate of C, given that I’m a self-employed writer and editor and not a 96-year-old brain surgeon? I factored in the N element – running out of Lingham’s Ginger Garlic Chilli Sauce – and the A/M/K essentials – getting stuff for friends – and set off.

Thursday was a Mordor day, but it was worth it. I got my X, Y and Z and saved at least £50 on those; I did my popping into to wild metropolis that is Bangor and had a drink in a coffee shop with a communal pine table and free WiFi, feeling all street and urban (think Blade Runner, oh, OK, I lie); I got my things in Waitrose. A few example purchases illustrate my point: some I could have bought anywhere but there was no point in making another trip when I was in Waitrose already (mushrooms, grapes); some I bought because I prefer the Waitrose own brands (small tinned tomatoes, anchovies); and some where enquiries about buying them locally would be met with ‘you must be joking’: pickling onions (why not???), camomile and lavender tea, linguine, Jarlsberg (I know some people think this Norwegian cheese tastes like rubber, but I like it), Greek basil, chilli crackers… and, of course, Lingham’s Ginger Garlic Chilli Sauce. I’m a happy bunny. So I really couldn’t be too much of a purist and abandon the supermarket altogether; getting even that little lot would have involved hours online, or trekking from small shop to small shop in a diminishing spirit of optimism, or growing my own. That’s an option I do explore, but you can’t grow bottles of Ginger Garlic Chilli Sauce. Xanthe Throngdribble is far too busy, plus she now needs another alias.