What is it with Brits? When it comes to humour, most of us dearly love a double-entendre or anything scatalogical. When I was doing stand-up I sometimes felt that I could abandon my act and say ‘bottom’ for 20 minutes, and get the same hysterical response. Mind you, I was never brave enough to try it, not even at the midnight show at the Comedy Store.

So it’s probably best to confront all the Carry-On style double entendres immediately. This post is about sausages. That’s right, sausages: ‘An item of food in the form of a cylindrical length of minced pork or other meat encased in a skin, typically sold raw to be grilled or fried before eating’, to quote the OED, and absolutely nothing else. OK?

We’re very lucky round here in that many of the butchers take pride in their ‘item[s] of food in the form of a cylindrical length of minced pork’. Perhaps it’s not surprising; there’s a long-established tradition in Britain of local pig-rearing and smaller-scale butchery. Admittedly the small-scale butchery nearly disappeared, but, like some other food traditions – decent breadmaking, for instance – care and attention are again being given to pork products, and on a satisfyingly artisan basis. 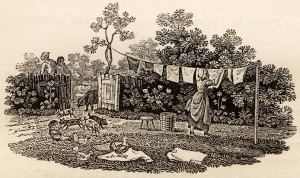 And, even if we haven’t all quite got back to the point where there are piglets playing about while we hang out the washing, the tradition of small-scale pig-rearing is also beginning to reappear.

Some of my friends, for instance, have a pig-sharing thing going on – one rears the pig, the rest share the expenses and will get a share of the haul. But it’s not for me, despite the fact that I do have an old pigsty available. First, the neighbours would probably object, especially the Chapel next door; second, the pigsty is now a garden store and I’d have to clear it out if I wanted to keep a pig. Third, I must admit to being a bit nervous around pigs: I’m no Lord Emsworth, and they are big. One farmer I know had an enormous evil-tempered sow straight out of Celtic myth, and she scared even him (the sausage maker got her in the end; while it would be exaggerating to say that his village put the bunting out, many people were relieved – she’d been prone to escaping).

And, of course there’s that other reason: I can get good sausages and bacon easily, and  without all the fuss, bother or inevitable deterioration in neighbourly relations. The Spar shop in my village houses an award-winning sausage maker; there are multiple delicious choices at the local farmers’ markets and even the local Co-op does a good selection in their premium range. I’ve tried many of the flavouring options available and am currently coming down in favour of cracked black pepper sausages, either from local producers Oinc Oink (a happily bilingual name – there’s no ‘k’ in modern Welsh) or Ynysgyffylog. They’ve got enough punch to stand up to all sorts of other ingredients and are perfect for when I want exactly that impact but without the garlic of my local butcher’s best Toulouse-style sausage (itself ideal in cassoulet). And when I can’t get any of those, largely down to bad planning on my part, I get the Co-op’s Lincolnshires. Very good, very sage-y, as a good Lincolnshire sausage should be.

Ever since I discovered a tasty recipe in an old copy of Katherine Whitehorn’s Cooking in a Bedsitter I’ve done much more than simply bake / fry / grill sausages and serve them neat, as it were (I did adapt the recipe, which was from 1974 – tinned carrots? I think not…). A good sausage is a good sausage, no matter how you cook it – and a bad one will always be a disgrace, much more appropriately found – and left – in CMOT Dibbler’s tray in Ankh Morpork than in my sandwich / bake / ragout / salad. Their potential is enormous, as indicated by all the /// alternatives. So here’s my latest recipe, a warm salad. The weather isn’t summery enough for a cold one. Yet.

The recipe uses cooked sausages. I bake mine, while I’m cooking something else, at about 180 degrees, 160 degrees fan / GM 4 for approximately 30 minutes (depending on their thickness). I then let them cool completely. It’s the spuds that are warm, not the bangers…

Chop the potatoes into chunks no bigger than 2cm, and put them in a pan of cold water. Bring to the boil and simmer until cooked. While the potatoes are cooking, chop the cold sausages into slices and put them in a large bowl. De-string the celery sticks and chop them up too, then add to the bowl as well. Cut the shallots in half and remove any greenish centres which can be bitter, then slice them into rings and add to the bowl as well.

Test the potatoes and check that they are just tender, then drain them well. Add them to the bowl and then quickly add the mayo, yoghurt and mustard. Add a little salt and turn the salad over carefully with a wooden spoon; the potatoes should not break up, but everything does need to be covered in the dressing. Add lots of black pepper and a good handful of chopped parsley and stir gently once more, then put it onto warmed serving plates. Serve immediately, with chunks of bread.

(And then steal any left-overs…)