I bake my own bread. Well, sometimes I bake my own bread – most times, really, unless I’m unwell or in a frantic rush or have a broken freezer. I didn’t, once upon a time, and that was because I couldn’t. Really. I produced slabs which would have made good ballast and which even the birds rejected when they were thrown on the lawn (where they made a substantial dent). And then I finally got round to leaving London, eleven years ago.

While I lived down south, and while I had a respectable income – not excessive as I mostly worked in the book trade, just acceptable – I could afford to buy the bread I liked. Sourdoughs, perhaps; granary cobs crunchy with sunflower seed toppings; white loaves which didn’t taste of boiled baby’s blanket. There’s a place for the BBB loaf though – a bacon sandwich isn’t quite right without soft and slightly soggy bread – but it wasn’t right for my everyday life, which was what it looked like becoming. Getting those artisan breads was then next to impossible without a long drive, even had I not managed to halve my income.

I found a wholemeal loaf that wasn’t too bad, or so I thought. It would fail to go off even after a week which I found rather suspicious, but it didn’t leave a strange aftertaste or turn to putty when you ate it. And then I read the ingredients, and came face to face with the fact that I was going to have to do something. I’ve always held to the line that if you can’t pronounce the ingredients, then you shouldn’t be putting whatever it is in your mouth. So how about ‘mono- and di-acetyltartaric esters of mono- and di-glycerides of fatty acids’? They’re emulsifiers, basically, but… but…

I was going to have to learn to bake bread.

Financially, I had it planned. It would work out either cheaper or at roughly the same cost; I’d also have bread I liked and would be less likely to throw out for the birds. I’d my two freezers, I was part of a wholefood co-op and I knew someone who would be prepared to split a sack of flour with me. But practically? Hm. I was back with the awful reality of The Slabs. I told a friend of mine – a male friend of mine, an essential fact – that it was no good, I couldn’t bake bread. I’d just have to get to like E471, E481 and E920. (The latter is L-Cysteine, derived often from pork and also, sometimes, from hair – human hair, it has been alleged.)

My friend assumed an insufferable expression of masculine superiority and told me, in incredulous tones, that anyone could bake bread. He baked bread, for heaven’s sake. This of course, is all the incentive a self-respecting independent woman needs. Anything a man could do, I could do, and so there. And I did. 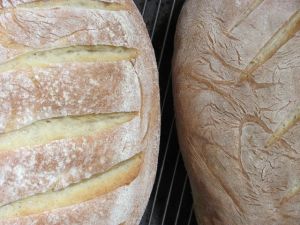 My breadmaking got better and better; I branched out from tin loaves to cobs and from using easy yeast to starters. I made olive bread and sunflower loaves and loaves containing sun-dried tomatoes. I made soda bread, pain de campagne and pitta; I made plaits and foccacia and San Francisco sourdough. I foreswore the E920, and used flour, salt, yeast and water. Sometimes I used olive oil; sometimes I used buttermilk.

And then I got hooked on real yeast. It’s no good, it just gives a different taste. It’s not that it’s difficult to use.

I swear it’s easier to score hard drugs (should you wish to do so, ahem). This is one problem I cannot ascribe to being ‘twelve miles from a lemon’, as it also besets foodie friends in London. Once upon a time bakers used real yeast and could be persuaded to sell some to members of the public, apparently. Not so now, though one friend has found a local bakery which will part with a little, reluctantly and at a surprising price. A hefty price for a small piece, barely enough to bake a single loaf, which they then dispense as though it was crack – secretly, furtively, behind the counter. Goodness gracious.

Surprisingly, a supermarket came to the rescue. Morrisons, but only Morrisons in Aberystwyth – 55 miles away, approximately. A keen baker friend had to go there regularly and would bring some back for both of us (50p for 126g), but circumstances have now changed and she’s no longer travelling south every week. You can get fresh yeast online, but supplies are erratic and you often have to buy a minimum of 400-500g. As 15g will do for 700g of flour, I don’t really need half a kilo.

In the short term, we’re sorted – you can freeze fresh yeast for a while, so we bought up Morrisons supply, cut the blocks up into individual portions, wrapped them up and shoved them in our freezers. But what happens when that’s all used up? Yeast Quest, that’s what. Again.