Sometimes, when you’re bread making, you have disasters. I’ve produced loaves even the birds won’t touch, and others which have been more air bubble than bread. I’ve made loaves which fell apart at a touch (how the heck did that happen?) and loaves I couldn’t get the bread knife to even scratch.

Those days have, due to huge amounts of practice, largely gone. Oh, I can still have my off days – who can’t? Days when I forget to set the timer, get distracted and have no idea how long the bread has been in for; days when I even forget that the timer exists and am only alerted to imminent disaster by the acrid smell of bread burning. Then there are days when I get everything set up and forget one vital thing. Like whether or not I’ve got enough starter.

I set everything up on Sunday and then looked at the Le Parfait jar in which my starter was sitting, allegedly ready. Only it wasn’t. I’d made the mistake of using almost all of it, and had then had to revive it big time. I’d thrown away most of the first revival – very watery – and done the second. I really needed to do a third, but I was also out of bread and out of fresh (or dried) yeast. And there wasn’t very much of the starter anyway, not if I wanted to keep some back and avoid making the same mistake again. But what there was did look quite lively.

The inspiration struck – I thought I’d seen something in James Morton’s excellent book Brilliant Bread. And I had – a basic formula for a sourdough. One I could adapt to whatever quantity of starter I had available. So I got the scales, found a clean bowl, found the calculator, found a pen, found some paper, had to find the calculator again… but it was worth it.

Essentially the formula is 2 parts white flour to 1 part starter. Easy. I had 160g starter (measured out in my clean bowl), so I needed 320g flour.

Then I had to work out the water I needed – not quite as straightforward, but simple once you realise that the starter can be assumed to be 50:50 flour and water. You need 75% of the total weight of flour, so my starter could be assumed to  contain 80g flour – with the 320g, that made 400g. Three-quarters of 400 is 220g of water.

Made up tepid water in jug, put jug on scales. No idea how much jug itself weighed. Poured out tepid water, replaced empty jug on scales, set scales to 0 (thank goodness for digital scales). Filled jug with tepid water until it weighed 220g.

Salt, nearly forgot salt. Salt should be 2% total flour weight, so 8g in my case. No probelms.

And then I made my sourdough as normal, letting it prove in the fridge overnight. Second prove in the morning, only took about a couple of hours; result? Great – lunching on fresh bread. On the perfect mini sourdough (not so mini, come to that). 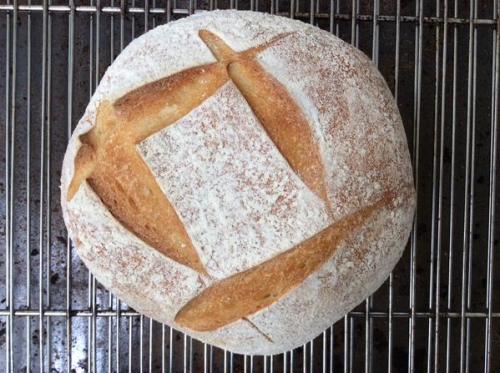 Obviously I had to adjust the cooking times slightly, but that’s no hassle. And – quite frankly – neither is working out the maths. And the next time I’m faced with a similar problem (OK, piece of stupidity), I know what to do. Find the calculator.

Oh yes. And remember to keep some of the starter back for that next time.

2 thoughts on “Chuffed to bits by bread!”