I do pastry. I do bread, too. But I can’t do cakes – or rather there are a limited number of cakes which I can do, and which work well. But something like a Victoria sponge? Touch and go. However, pastry – no problems. So when I know people are coming round I don’t make a cake, I make a tart. Or perhaps I’d better call them flans, to avoid any sniggering at the back. Nope – tarts they are, and tarts they will remain. Or tartes, since the origin of mine is indisputably French.

There is something about a slice of fruit tart served on bone china, with a healthy dollop of cream or Greek yoghurt. It somehow feels special, more special than a slice of Victoria sponge – given the nature of my sponge, this is not surprising, mind. So when I knew I had people coming round and spotted that the Co-op had suddenly received a consignment of white-fleshed nectarines and were selling them off cheaply for some reason (I’m not complaining), I felt the call.

So what about pastry? Is it phenomenally difficult? I don’t think so, but then there are people out there who wouldn’t believe that a grown woman could mess up a Victoria sponge. There are all sorts of stories about chilling your hands in cold water or – I kid you not – wiping ice cubes over the surface, and lots of people have unorthodox methods that work for them. You do need to keep pastry cool, of course, but my hands aren’t particularly chilly, my worktop is unbrushed by ice cubes and my pastry still works. Just chill it (man). As long as the pastry is a fine crispy shortcrust, it doesn’t really matter how it’s made.

Anyway, here goes, my fruit tart made with pâte brisée, a version of the classic French shortcrust which I have found works really well. In the UK, it’s usual to rub the fat into the flour first; in France you don’t. I go for the British way because I just hate breaking up raw egg with my fingers (eeeeuuh).

Nectarine tart with almonds
for a 23cm loose-bottomed tin

Make the pastry first, because it needs to chill for 30 minutes and will be baked blind, anyway. Put the butter into a large bowl and cut it into small pieces with a knife. Sieve the flour into the bowl and then rub the two together with your fingers until the mixture resembles fine breadcrumbs – this always takes longer than you think. Then add the egg, break it up with a fork and mix it in well. The pastry will come together gradually into a soft dough but don’t knead it like bread, just press it together gently and add a little very cold water if necessary – but it probably won’t be. Form it into a ball, put it into a clean bowl and cover it with clingfilm. Chill in the fridge for 30 minutes.

Pre-heat the oven to 200 degrees C, 180 fan, gas 6 and grease a loose-bottomed quiche tin. Lightly flour the worktop and take the pastry out of the fridge. Warm it up in your hands a little to soften it, then carefully roll it out into a circle, changing direction and turning it over; keep the worktop floured while doing so. Lift the pastry up, over the rolling pin, and carefully drape it over the tin. Then gently manipulate it into the corners and folds of the tin (patch any gaps; dip a pastry brush in milk and stick a new piece of pastry on top). Trim off the excess, ready for baking the case blind. Prick the bottom of the pastry and line it with a generous circle of greaseproof paper, tip a load of dried pulses or baking beans on top of the paper and bake for 15 minutes. Set it aside to cool for 10 minutes, then remove the baking beans and paper and let the case cool completely.

Cream the butter and sugar until light and fluffy. Gradually beat in the egg, adding a little of the flour as you do so. Then stir in the Amaretto, ground almonds and the rest of the flour; mix everything together well. Put this mixture into the tart case and level it down. Cut the nectarines into slices and put them on top of the filling in a circular pattern, saving the smaller slices for the inner circles. Then sprinkle a little more sugar on top and bake the tart in the oven for 10 minutes. Lower the temperature to 180/160/gas 4 and cook for another 20 minutes or so – check towards the end to make sure the fruit isn’t catching (a little caramelising is fine; burning is not, ho ho, don’t ask me how I know).

Serve warm (rather than hot) or cold. Cream or good Greek yoghurt served on the side is wonderful. Sigh.

I’ve just realised two things – Christmas is quite close, and that it’s not quite as close as I thought it was. Somehow I managed to mentally – not physically, I’ve not been whisked away in Stewie’s time machine – lose a week. I’m putting it down to working like a maniac, but have happily got an almost clear run now (owing to thinking Christmas is closer than it actually is and packing everything in). So I’m having fun. I’m going to see The Hobbit this afternoon – a round trip of over 100km; it better be good – and I’ve been making my favourite sweets: Hedgehog Balls.

I’ve been making these, on and off, for years and years and I honestly can’t remember where the original recipe came from, but it’s so adaptable that the version I make now probably bears no resemblance to it. The giving of the name, however, I can remember. They were named by a friend of mine who was, I think, about 6 at the time. All the adults fell about, and they’ve been known as Hedgehog Balls for the last five years or so.

These little darlings are perfect to make with children though be warned – the mess is phenomenal. Sorry, that should be PHENOMENAL, and that’s even when I make them without the aid and assistance of people under 10. Save cleaning the house (should you do such a reckless thing) for afterwards. But do make them, because they are worth it.

Oh, you’ll need a food processor; I hate to think what it would be like without – and a stick blender doesn’t cut it. Believe me, I know. And about 50 small sweet cases, the cuter the better. Plus, as you can tell from all the alternatives in the recipe, it’s very adaptable.

First, grind the seeds roughly – pulse only – and decant them into a large mixing bowl. Then add the dried fruit, halving anything big like the apricots and breaking up any gatherings of truculent sultanas. Grind the almonds quite smoothly and add them to the bowl. Decant the lot – carefully, ahem – into the bowl of the food processor. Set the empty bowl to one side. 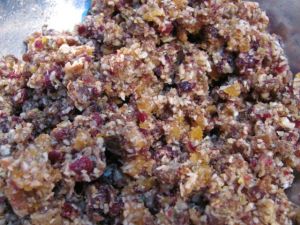 Add the coconut and spices to the mixture, then add some of the orange juice and process the mix – it should be thick and not sloppy, so be careful about adding more (you can always drink the rest, perhaps with Campari, just saying). Ideally, you want the mixture to have the texture of good – chunky, but not too chunky – mincemeat. If it is a bit too chunky, it won’t hold together when you start to form the balls, but it can always be returned to the processor for a final whizz.

Empty the dried fruit mixture back into the bowl. Grind some more nuts and put them in a smaller bowl, and put some dessicated coconut in another. Put out the sweet cases on a couple of baking trays and remove all animals, relatives, men who are hanging about trying to help themselves, toddlers, etc, from the kitchen. Older children are fine – in fact, they love this. Keep a damp rag handy, though.

Carefully form the mixture into small balls, just the right size to fit gently into the cases. Sometimes you will be able to roll them gently between the palms of your hands; sometimes they will need to be shaped with your fingers (and they should never, ever be thrown at your sibling or at the cat). Then dip each one, alternately, in the ground nuts or the coconut, making sure they are covered all over. Put them carefully in the sweet cases, and then put the trays in the fridge for at least an hour. They will keep for about a week, but they generally only last a day or so.

Afterthought, before going so far as do do any actual housework: you could try substituting some Cointreau for the orange juice – I don’t, because of children. But you could. Hm, wonder how that would taste? Might as well add to the mess before I clear up…