Sometimes you can be wrong about things for ages. Sometimes your prejudices have no basis in fact, and sometimes your pride just gets in the way of you admitting it. Yes, I am Elizabeth Bennett – well, except for the fact that this is not the early nineteenth century, I’m not wearing a high-waisted empire line dress, and I don’t have Colin Firth hidden in the wardrobe. But I am talking about something else dark and handsome: Marmite.

I’m taking a risk here. At this point at least half my readers will go ‘bleagh’ and move on, making horrible retching noises. That’s because people either love the dark savoury spread or hate the revolting black slimyness, depending – a fact Marmite have often used in their advertising.

Just before I left London I was in my normal overcrowded coffee bar, picking up my breakfast espresso and croissant. The customer in front of me asked the new, very young, very French assistant for coffee and some toast and Marmite. The boss was distracted with my order, and we all suddenly noticed at the same time that the girl was slathering vast quantities of Marmite onto the toast. Everyone started shouting at once, but her English had evidently abandoned her in the resulting panic so I joined in with ‘non, non, non, c’est dégueulasse!‘ at the top of my voice. And at that time I did think it was – well, I suppose the best translation in these circumstances is ‘vomit-inducing’.

I’ve no idea when I went over to the dark side – I genuinely cannot remember. I’m not even sure when I started buying it in the biggest possible jars, the 500g – yes, that’s half a kilo -ones. I get through about three a year, and that’s just me… so what do I know about my toast topping of choice? It turns out, not a lot.

I knew it was a fantastic source of B vitamins. OK, it’s a bit on the salty side but you’re not going to eat it by the spoonful unless you are someone desperately trying to impress a young French girl working in a London coffee bar. It’s a by-product of the brewing industry, and a little makes a vast amount of difference to the taste of a stew. That was it.

Oh, I did know that the recipe and process were secret. That had filtered through. As had the fact that it is not the same as Bovril: dear lord, no. Bovril is made from cows and I don’t want to know what bits or how. Marmite is 100% vegetarian. 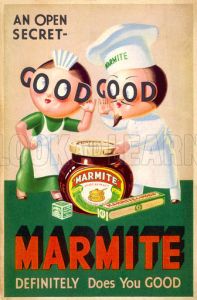 • But I didn’t know that the first Marmite pots were earthenware, even though it is named after a marmite, traditionally an earthenware cooking pot. Somehow I thought it was always sold in the distinctive glass jars. In 1974 there was a jar shortage, and Marmite was sold in more conventional ones for a while. Some things are just plain wrong.

• I didn’t know that British troops in WW1 had Marmite as part of their rations, or that it was supposed to be particularly important for those serving in Mesopotamia, where deficiency diseases were thought to be more likely. It was also used as a vitamin supplement for German POWs held in Britain during the Second World War. And in 1999, British soldiers in Kosovo were sent their supplies.

• The BNP used a jar (and the company’s  ‘love it or hate it’ slogan) in an ad campaign, leading to threats of legal action if the ad was not withdrawn. Didn’t know that either. Of course, the ‘love it or hate it’ Marmite comparison has been used for numerous analogies, not just the BNP – yuk. It’s also been used to describe things as diverse as Wagner, test matches at Headingley, George Galloway, Russell Brand, Cath Kidston’s fabric designs, The Archers, Thought for the Day, Times New Roman, bagpipes, Boris Johnson, faith schools, Shirley Bassey, Twitter, Lily Allen and Ken Livingstone. There are many others… horse racing, for example. Enough, already. (Oh, and there are two Marmite board games and even a Marmite rap.) Ahem.

• Nor, thankfully, did I know about a couple of Marmite cocktails. No, no and thrice no. One involves vodka and yellow tomato juice and blackberry liqueur as well as other ingredients. The other, allegedly from a top London hotel, I’ve only heard about; it’s unsupported by concrete evidence and may have been so scary that its existence is subject to official sanction.

• On a more positive note, I’d absolutely no idea whatsoever that Marmite was used to treat mill hands in 1930s Bombay; they were suffering from a form of anaemia and the remedy worked (that was because of the folic acid it contains). It’s also been used to treat people suffering from malnutrition.

• It is, however, banned in Denmark. It’s fortified with some other vitamins, and that makes it illegal there. Oh, all right – it isn’t, even though that’s how it was reported. Products which are fortified have to be licensed in Denmark; the company which imported Marmite wasn’t licensed and therefore stopped selling it. Not quite the same thing… but nearly. There have also been similar problems in Canada. And the idea that it was banned from prisons because it could be used to make hooch is just an urban myth. It isn’t, and it can’t.

• I didn’t know that the New Zealand version had a different taste. I knew it had different packaging, but I didn’t know it tasted all that different (‘less tangy’, apparently – it contains caramel and sugar, which the original does not). I also didn’t know anything about ‘Marmageddon’, the 2012-13 Marmite shortage in New Zealand and Australia, after the manufacturing plant was damaged in the Christchurch earthquake. Apparently there was panic buying. I’d have been there, storming the supermarkets.

And during Marmageddon ridiculous prices – up to NZ$800, according to some sources – were demanded for jars. This may or may not be completely true; it could be more press exaggeration. Anyone know for sure? Anyone spend NZ$800 on a jar of Marmite?

• And another question. It’s supposed to keep mosquitoes at bay. Anyone know if it works, and if it does, do you have to lather it on – as though you were that toast in a London coffee bar – or eat it? Just asking… even though I now love Marmite, there are some things I do not want to do. Almost as bad as the cocktail, in fact.

Oh, I know, such a predictive post title – but I couldn’t resist! Yes, it’s rant time. Or maybe it isn’t. Maybe it’s more a ‘shaking my head in sad bafflement’ time.

I’m a baker. I love making bread, hands and/or ancient Kenwood permitting, and do so on a regular basis. I slice it and store it in the freezer, and always try to have stock in. That’s because if I run out I’m back to the boiled baby’s blanket that passes for a loaf – even a supposedly ‘artisan’ loaf – in a local supermarket. Oh, all right – rant alert: what the heck is ‘artisan’ about any Tesco bread anyway? But I suppose ‘mass-produced in some giant factory and then shipped out to stores for a quick tart up’ doesn’t have quite the same marketing spin, does it?

I buy flour in bulk. I used to share a sack with a friend, but I’m using much less wholemeal now, having finally twigged about excessive fibre giving me digestive problems. So I now buy five 1.5kg bags of Marriages Strong White Organic from a wholefood co-op, and add a little wholemeal for extra oomph. I’ve been quite happy with that, but the latest batch has been rather different. It’s softer than normal, much lighter, even finer. It’s got a completely different feel, and I’d be happy to make cakes with it which I would normally avoid with bread flour. It also makes perfectly good bread, but I’m intrigued. I know flour varies enormously – even the flour you get from one field of wheat can be different from that produced by the grains grown in the next field – but this is a huge change. Maybe it’s time to look at some different flours?

I’ve tried quite a few, all stoneground – the Marriages is roller-milled, but until now I’ve been fine with that; it’s the only roller-milled flour I’ve felt was comparable. I’ve tried other roller-milled flour (the standard way of producing flour, at least in a more ‘commercial’ setting) and I can tell the difference, or I think I can. I like my flour to taste of something, and I find that other roller-milled flours are rather bland for breadmaking. Great if that’s what you want (or, of course, what you can afford) and absolutely fine for some circumstances, but I did a comparison bread test and yup, I could tell. Or maybe it was a case of emperor’s new clothes – I’m still not sure.

If I am right, there might be good reason for it. Many bakers think roller mills run too quickly, thus generating enzyme-damaging heat and giving rise to flour which lacks character. In addition, roller-milled flour has all the goodies – like the wheatgerm – removed and then added back in at the end of the milling process.

But I’m not going back to prehistory, either: grains ground between the stones of a quern like this one could a) take forever – I know, I’ve done it, and b) add extra tooth-grinding grit to the flour, depending on the material used for the quern. Using a quern also wrecks your knees, neck, back, hands and wrists – women’s work, eh?

Nope, I’m happy with perfectly normal stoneground for my bread, so I’m going on a mission: to try all sorts of flours from small mills, big mills, artisan mills, little mills up obscure lanes in the Welsh countryside who sell their flour though a single outlet in Aberystwyth, Machynlleth, Conwy or Bangor. Whenever I find something a bit out of the ordinary, I’ll buy it and give it a go.

I can easily get Marriages and Dove’s Farm, and those are what I’ll use in between. I can also lay my hands on Bacheldre (the mill was up for sale in the summer, can’t work out if it’s been sold or just withdrawn from sale), Gilchesters, Little Salkeld Watermill and Shipton Mill, because they’re all available through the co-op or local healthfood shops. But I’m really after the unusual (plus I had a weevil-based experience with Shipton Mill’s strong white which has rather put me off retesting that one).

It doesn’t have to be wheat, either; of course there are other grains to try. I’ve used spelt and I love it for soda bread; its perfect for that. I’ve tried emmer and einkorn (as an acrchaeologist, even an ex-archaeologist, I felt obliged to give these neolithic grains a go) and I’ll happily have a bash at almost anything. But for me, it’s fundamentally wheat flour. But which one? I’m no nearer to my answer, though I have now set myself off on a Flour Quest for 2015 (think Shrek and Donkey going after Princess Fiona, though I’m female, not green and am unaccompanied by Eddie Murphy). But am a lot nearer to a beautiful fresh loaf. Must let it cool down, must let it cool down…

PS: since writing this I’ve been in contact with Marraige’s, and they’ve asked me to send a packet back to them for them to check out. Luckily I still had one unopened pack – the rest had gone in the flour bin – and it’s on its way back to Essex as I write. A strange Christmas present for the miller, but there you go… us flour-obsessives are a strange lot.